Lew Ayres achieved quick fame in Hollywood, and is best known for his role as Dr. Kildare in a series of films in the late 1930s and early 1940s. But his strong anti-war beliefs almost cost him his career.

The boyishly handsome Ayres was a dance band musician when he was spotted by Hollywood talent scouts while playing in the Cocoanut Grove nightclub in 1928. He quickly made his film debut in a bit part 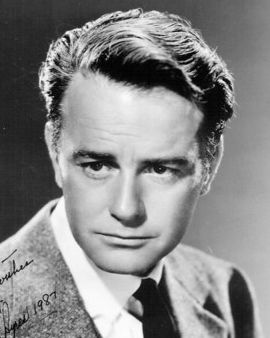 In 1941, the deeply religious Ayres was drafted to serve in World War II but, because of his strong anti-war beliefs, he declared himself a conscientious objector, and refused to fight in combat. During those patriotic times, the film-going public was stunned, Ayres was dropped by the studio, and many exhibitors refused to show his films. The popular "Dr. Kildare" series continued without Ayres, however, focusing on Barrymore's crusty character, beginning with "Calling Dr. Gillespie" (1942). Ayres later volunteered for non-combat medical service, and he served with the U.S. Army as a medical orderly and chaplain's assistant, distinguishing himself under fire on the front lines in the South Pacific.

After the war, Ayres returned to Hollywood and attempted to resurrect his career. He regained public acceptance with his roles in "The Dark Mirror" (1946), "The Unfaithful" (1947) and "Johnny Belinda" (1948), for which he received an Academy Award nomination as Best Actor. Ayres was offered the title role in a television series based on Dr. Kildare, but the network refused to honor his request that the series not be sponsored by any cigarette manufacturers. Ayres appeared in few films after that, including "Donovan's Brain" (1953), "Advice and Consent" (1962), "The Carpetbaggers" (1964) and "Damien: Omen II" (1978). He also appeared in many made-for-television films in the 1970s and 1980s.

Ayres' interest in religion resulted in his producing, directing and narrating two documentaries -- "Altars of the East" (1955) and "Altars of the World" (1976), both based on his own research and writing.