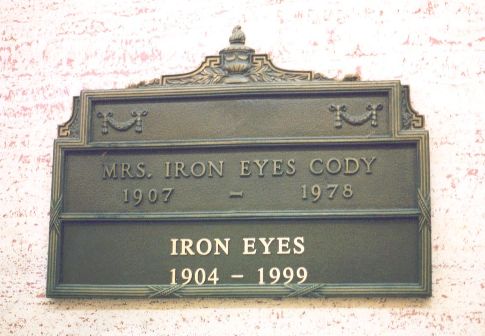 
Iron Eyes Cody, an American Indian actor who appeared in more than 100 films, is best known for standing beside a littered highway and shedding a tear in the "Keep America Beautiful" television advertisements in the 1970s.

Cody's career began when a film crew came to his family's farm in the Oklahoma territory to shoot "Back to God's Country" (1919), and Cody got a job as an extra. His family then moved to Los Angeles, where Cody's father, Thomas Longplume Cody, worked as a technical advisor on Westerns. Cody appeared in dozens of Westerns from the late 1920s through the 1940s, usually in small, often uncredited roles. By the late 1940s, Cody was appearing in larger roles in films, including "The Paleface" (1948), with Bob Hope and Jane Russell, and "Sitting Bull" (1954), in which he portrayed Chief Crazy Horse. Cody also often worked as a technical advisor on films, on issues related to American Indian culture and history.

In 1996, a newspaper in Louisiana reported that Cody was not really an American Indian born in the Oklahoma territory, as he claimed, but was actually of Italian heritage, and was born in a small town in southern Louisiana. Cody denied the report.