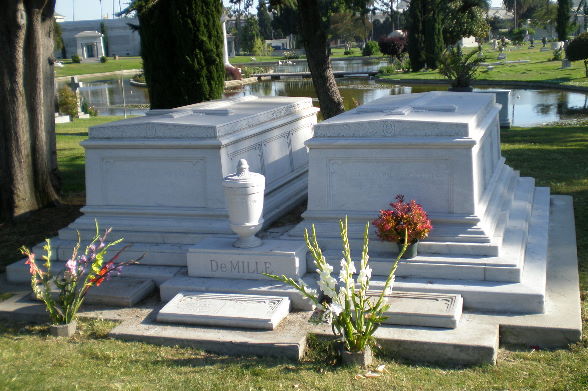 
Legendary director and Hollywood pioneer Cecil B. DeMille directed nearly 100 films, the vast majority of them silent films made before 1930.

DeMille's parents both wrote plays. After his father died, his mother supported the family by running a school for girls and a theatrical company, which DeMille helped operate for 12 years, often appearing in the productions himself. In 1913, DeMille joined with Jesse Lasky and Samuel Goldfish (later Goldwyn) to form with the Jesse L. Lasky Feature Play Company in Los Angeles. DeMille urged the group to consider switching from the short, two-reel films that were popular at the time, to a full-length, six-reel feature. The company's first production was "The Squaw Man" (1914), a feature-length Western, shot in a rented horse barn and on the hills around Hollywood. "The Squaw Man," written and directed by DeMille and Oscar Apfel -- DeMille even appeared in the film as an extra -- was an enormous financial and critical success, and helped transform Los Angeles into a film center. ("The Squaw Man" was also the only film to be made three times by the same director. DeMille made another silent version of the film in 1918, and a sound version in 1931.)

In 1916, the Jesse L. Lasky Feature Play Company company merged with Adolph Zukor's Famous Players to form the Famous Players-Lasky Corporation. Over the years, with additional mergers and corporate realignments, that corporation became Paramount Pictures, and DeMille was the creative force at the studio for decades.