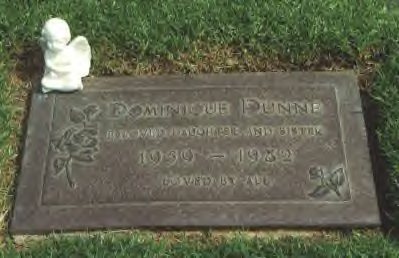 
Actress Dominique Dunne, best known for her role in "Poltergeist" (1982), was one of two young stars of the film to die at an early age. Dunne was killed by an angry ex-boyfriend a few months after the film's release. (The other star, Heather O'Rourke, died of an intestinal blockage at the age of 12, and is also buried at Westwood, about 100 feet from Dunne's grave.)

Dunne attended high schools in Los Angeles, Connecticut and Colorado. After she graduated, she spent a year in Italy, then returned to Colorado to attend college and study acting. She left college after a year and returned to Hollywood to pursue her career. She landed her first role in the made-for-television film, "Diary of a Teenage Hitchhiker" (1979), and appeared in several more made-for-television films, including "Valentine Magic on Love Island" (1980), "The Haunting of Harrington House" (1980), "The Day the Loving Stopped" (1981) and "The Shadow Riders" (1982).

Dunne also appeared in several television series in the early 1980s, including "CHiPs," "Hill Street Blues," "Fame," "St. Elsewhere" and "Lou Grant." Dunne made her big-screen debut in "Poltergeist" (1982), playing Dana Freeling, the oldest daughter in a family that finds their home haunted by unfriendly spirits.

In late 1982, Dunne had been living with her boyfriend, John Thomas Sweeney, a chef at the trendy Ma Maison restaurant in Beverly Hills, in a home in West Hollywood. He moved out, then attempted to move back on Oct. 30, 1982. Dunne did not want him to return, they got into an argument in the driveway of the home, and Sweeney strangled her. Dunne never regained consciousness, and died five days later, just a few weeks before her 23rd birthday.

Sweeney was convicted of voluntary manslaughter, and sentenced to six and a half years in prison. Dunne's life and death were the subject of a documentary, "Dominique Dunne: An American Tragedy" (1998).

Dunne was the daughter of novelist Dominick Dunne, and the sister of actor Griffin Dunne.