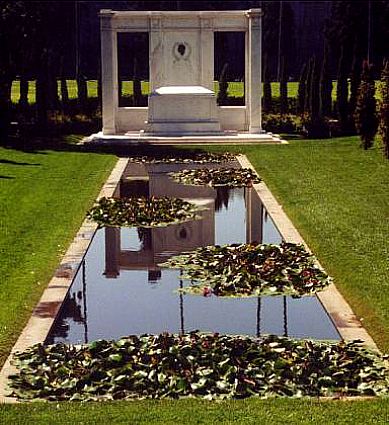 
Hollywood Forever Cemetery is home to the spectacular memorial to the ultimate swashbuckling actor, Douglas Fairbanks Sr. At the end of a 120-foot-long reflecting pool, Fairbanks' sarcophagus rests on a white granite platform in front of a large white wall, highlighted by his profile in brass.

Fairbanks began appearing in amateur theater in Denver, CO, at the age of 12, and he continued on the stage while attending the Colorado School of Mines. He moved to New York City, and made his debut on Broadway in 1902, in a play titled, "Her Lord and Master." Five years later, just as he was building his career as a leading man on stage, he married an industrialist's daughter, and left the theater to work in his father-in-law's soap company. Luckily, the soap company went bankrupt, and Fairbanks returned to the theater the following year.

By 1910, Fairbanks was a star on Broadway, thanks to the same qualities that would eventually make him a star in Hollywood - boundless enthusiasm, moral courage, a mischievous attitude, and fearless physical agility, all topped by a twinkling eye and a roguish grin. He made his film debut in "The Lamb" (1915), and a year later, he was popular and successful enough to establish his own production company, Douglas Fairbanks Pictures.

In 1919, Fairbanks was on a World War I Liberty Bond tour with comedian Charlie Chaplin when he met and fell in love with "America's Sweetheart," actress Mary Pickford. They were married the following year, and moved into "Pickfair," their mansion in Beverly Hills. Pickfair quickly became the social center of Hollywood, and Fairbanks and Pickford became the closest thing to royalty the country had ever seen. Also in 1919, Fairbanks, Chaplin, Pickford and director D. W. Griffith formed United Artists, a film production and distribution company.

After starring primarily in comedies up to that point, Fairbanks began to specialize in action and adventure films throughout the 1920s, beginning with "The Mark of Zorro" (1920), and followed by "The Three Musketeers" (1921), "Robin Hood" (1922), "The Thief of Bagdad" (1924), "Don Q, Son of Zorro" (1925), "The Black Pirate" (1926), "The Gaucho" (1927) and "The Iron Mask" (1929). As a trained stage actor, Fairbanks had no problems making the transition to talking pictures, but his advancing age and choice of projects began to hurt his career. In one of his first talkies, Fairbanks and Pickford appeared in "The Taming of the Shrew" (1929) - the only film in which they co-starred - but it was a box office failure. Fairbanks next appeared in "Reaching for the Moon" (1930), a musical comedy featuring a young Bing Crosby in one of his first film roles, then attempted to revive his swashbucking ways in "The Private Life of Don Juan" (1934). The film, in which Fairbanks played an aging Don Juan, living off his legend and reputation, was a cruel twist on reality, and was Fairbanks' last film. In 1936, he divorced Pickford and married a former chorus girl, Lady Sylvia Ashley, then announced his retirement from acting.

After Fairbanks died in 1939, his body was stored in a temporary vault at Forest Lawn Memorial Park in Glendale, CA, while his memorial was being built. The memorial site, known as "Fairbanks Garden," includes his marble sarcophagus, surrounded on three sides by tall marble columns, and featuring a brass profile relief of the actor surrounded by olive branches. The memorial cost an estimated $40,000 - at the time, it was the most expensive memorial monument ever built in southern California. The dedication of the "Fairbanks Garden" was held on May 25, 1941, as Charlie Chaplin delivered a eulogy in front of a crowd of 1,500 mourners, including Fred Astaire, Norma Shearer, Randolph Scott and Darryl Zanuck.

Chaplin called Fairbanks "an eternal boy ... His was a happy life. His rewards were great, his joys many. Now he pillows his head upon his arms, sighs deeply, and sleeps."

Fairbanks' wife at the time of his death, Lady Sylvia Ashley, designed his massive memorial. She was later married briefly to Clark Gable, then to a Russian prince named Djordjadze. She died in 1977 is also buried at Hollywood Forever. Her grave is about 50 feet east of Cecil B. DeMille's crypt, and about 10 feet from the road. Her grave marker identifies her as Princess Sylvia Djordjadze.

Fairbanks was of the 36 founders of the Academy of Motion Picture Arts and Sciences, and served as the organization's first president. In 1940, two months after his death, he was recognized with a special Academy Award, for "the unique and outstanding contribution of Douglas Fairbanks, first president of the Academy, to the international development of the motion picture."