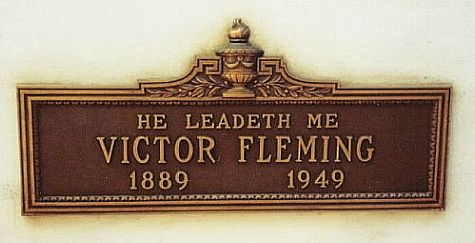 Fleming worked as an automobile mechanic and photographer before he entered the film business in 1910, as an assistant cameraman. As an assistant to Griffith, Fleming worked on several films starring Douglas Fairbanks, including "When the Clouds Roll By" (1919), which was Fleming's directorial debut. Throughout the 1920s and 1930s at MGM studios, Fleming gained a reputation as a dependable and capable craftsman who could get the best performances from his actors, but he was not known as a great or even a particularly creative director. That type of workman-like reputation was encouraged and rewarded at the studio that discouraged individuality among its directors, and where the slogan was, "The only star at MGM is Leo the Lion."

The MGM management style at the time even included interchangeability of directors. If a particular director was unavailable for re-takes or additional scenes for his film, another equally capable director would be used. For this reason, even though Fleming was give the Academy Award for "Gone With The Wind," so many other people were involved with this massive project that it's difficult to determine exactly what impact he had on the production, or the final product.