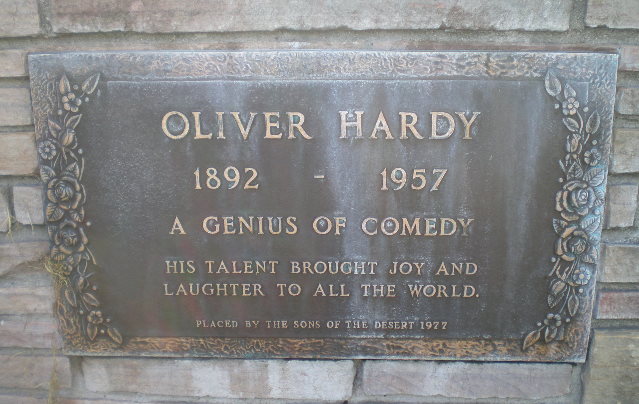 
A bronze memorial plaque over Oliver Hardy's grave describes him as, "A genius of comedy -- his talent brought joy and laughter to all the world."

Hardy -- Stan Laurel's partner in one of the most popular comedy teams ever to appear in films -- was born Norvell Hardy in Harlem, GA. His father, attorney and politician Oliver Hardy, died shortly after his son was born and, in his honor, Hardy changed his name to Oliver Norvell Hardy, and he often refered to himself by his full name in his films. As a child, Hardy's mother encouraged his interest in music. When he was only 8, Hardy toured the South as a boy soprano with Colburn's Minstrels. Hardy's musical interests surfaced in his later film performances, when he would often find an excuse to sing or play an instrument.

By 1910, Hardy was studying to become a lawyer, perhaps with an idea of following in his father's footsteps.

Hardy was also running a movie theater in Milledgeville, GA, and he decided that he preferred the world of entertainment to the world of law. When he saw the level of acting in the comedies being shown in his theater, the 18-year-old Hardy decided that he could do at least that good, and he set off for Jacksonville, FL, the film capital of the South. From 1914 to 1917, Hardy appeared in more than 100 short comedies for the Lubin and Vin film companies, usually in supporting roles as the star's pal or the villain. While in Jacksonville, Hardy also acquired his lifelong nickname -- Babe.

In 1922, Hardy had a bit part in a comedy short titled "Lucky Dog," which starred a young vaudeville comedian from England named Stan Laurel. The pair didn't work together again until "Forty-Five Minutes from Hollywood" (1926). Though Hardy and Laurel appeared in several more films together, it wasn't until Hal Roach paired them as a comedy team that the "Laurel and Hardy" characters emerged - the Mutt and Jeff pair, in suits and bowler hats, full of dignity and self-importance, set to take on the world. The only problems is, they always lose. They are innocent, simple and unswervingly dedicated to each other. And, through more then 200 films together for Hal Roach Studios, they never finished better off then they were when they started. 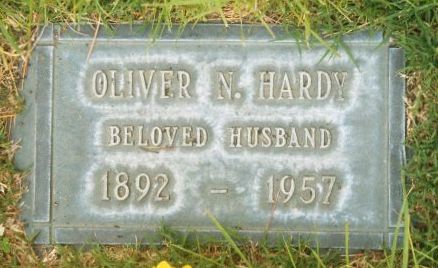 Though the Laurel and Hardy characters evolved slowly, "Do Detectives Think?" (1927) is generally accepted at the first official "Laurel and Hardy" film. The pair were both masters at every form of comedy, from broad physical humor and slapstick, to verbal sparring, to more subtle humor. Audiences would laugh just as hard at the pair being chased down a flight of stairs by a runaway piano, or Hardy's delicate "slow burn" after yet another of Laurel's well-meaning but misguided efforts. Few other comedians were as successful in so many different ways.

For a large man -- at his peak, he weighed nearly 350 pounds -- Hardy was athletic and extremely agile. Which was fortunate, since he was the one who usually ended up falling out of boats, slipping on banana peels, or tumbling out of windows.

Laurel and Hardy entered into sound films without missing a beat, or losing any of their comedy. In fact, their verbal exchanges became the more memorable parts of their films, starting with Hardy's oft-repeated comment to Laurel, "Well, here's another fine mess you've gotten me into." The duo also progressed from two-reel comedies to full-length features, even though they won an Academy Award in 1932 for "The Music Box," the first Oscar presented for a live-action short comedy. "The Music Box" was the simple story of Laurel and Hardy trying to haul a piano up a lengthy flight of stairs. The stairs are still there, virtually unchanged, at 923 N. Vendome St., near Del Monte Drive in Los Angeles, in the Silver Lake neighborhood. The stairs are a popular spot for Laurel and Hardy fans, and a commemorative plaque has been added to the site.