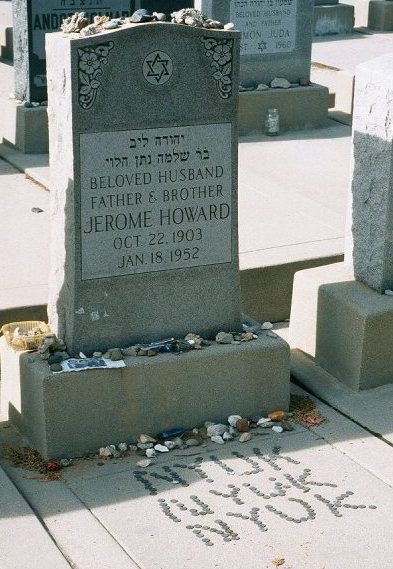 
Behind the Home of Peace Mausoleum, in the far southwest corner of Home of Peace Memorial Park, in the Western Jewish Institute section, you'll find the most-visited spot in the cemetery -- the grave of Jerome Howard, better known as "Curly" of the Three Stooges.

Curly was the rotund, bald Stooge who was usually on the receiving end of most of the physical abuse from his fellow Stooge and older brother, Moe Howard, whether being hit on the head by a sledge hammer, poked in the eyes, or grabbed by the nose with a pair of pliers.

Curly joined "Ted Healy and his Stooges" in 1932, replacing his older brother, Shemp Howard. Before joining the Stooges, Curly had a thick, wavy brown hair and a moustache, which Healy insisted he shave off. Curly always felt self-conscious about his shiny scalp, and he usually wore a hat when he was in public. Curly was adept at both physical and verbal comedy, and many of today's top comedians and actors credit him as their inspiration.

In 1934, Columbia Pictures offered a long-term contract to the Stooges if they left Ted Healy, which they did. The Three Stooges made more than 100 two-reelers for Columbia, and they were among the most popular and most profitable film performers from the 1930s through the 1950s, though they were never able to convince Columbia to allow them to star in a feature-length film.

Despite his on-screen image as an ill-mannered buffoon, Curly was a fine athlete, an accomplished ballroom dancer, and loved to sing. He was considered quite a lady's man, and was married four times. Throughout his life, Curly had a weakness for wine, women and song, and his wild life eventually did him in. He appeared in more than 100 Stooge shorts until he suffered a stroke in the set of "Half-Wits Holiday" in 1946. Shemp returned to the act to replace him. Curly suffered several more strokes between 1949 and 1952, and was confined for long periods in hospitals and convalescence homes. In early 1952, he was admitted to a place with a name that seemed to come from a Stooges comedy -- the Baldy View Sanitarium, where he died at the age of 48.

Unlike his brother Shemp, Curly's grave marker does not include his well-known Stooges nickname, or any other indication of his career. The inscription simply states, "Jerome Howard - Beloved Husband, Father and Brother."

Curly's grave is by far the most popular spot in the cemetery, according to cemetery employees. His tombstone is usually covered with flowers, coins, stones, notes and other items left behind by fans. On a recent visit, someone had spelled out his well-known catchphrase, "Nyuk, nyuk, nyuk" in pennies in front of his gravestone.