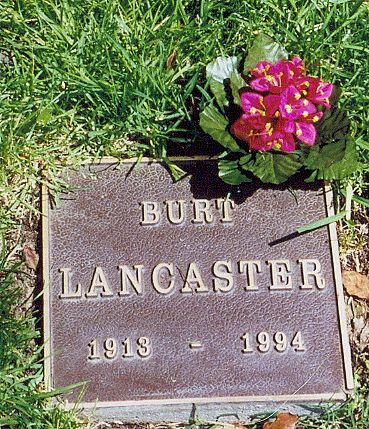 
Burt Lancaster was a powerful, two-fisted actor with the 1,000-watt smile, best known for his tough-guy roles, and nominated four times for the Academy Award as Best Actor.

A high school athlete, Lancaster enrolled in college on a basketball scholarship, but dropped out to join an acrobatic act, performing a high-bar routine with traveling circuses, in nightclubs and on vaudeville. Lancaster was drafted in 1942 and, with his experience as a performer, he was assigned to a new division created to bring entertainment to the troops in Europe, usually in the form of a traveling vaudeville-type show. Lancaster often served as master of ceremonies for the shows, and he also performed his old circus act.

When he returned from the service in 1945, he was still in his Army uniform, riding in an elevator in New York City, heading for a job interview, when he was spotted by a talent scout, and signed for a role in the Broadway play, "A Sound of Hunting," a military drama. Though the play lasted less than a month, Lancaster, in a powerful role as leader of the squadron, was a hit. He received contract offers from seven Hollywood studios, and signed with Paramount Pictures.

Lancaster made his film debut as Swede Anderson in "The Killers" (1946), based on a short story by Ernest Hemingway and co-starring Ava Gardner in one of her first major roles. The film, a complex, gritty tale of crime, treachery and double-cross, was nominated for four Academy Awards, and made Lancaster a star. Lancaster played similar tough-guy characters in "Desert Fury" (1947), "Brute Force" (1947) and "I Walk Alone" (1948) -- his first film with off-screen pal and frequent co-star Kirk Douglas. With this string of commercial and critical successes, Lancaster formed his own production company in 1947, a move previously unheard of for such a young, inexperienced actor. His first film as a producer was "Kiss the Blood Off My Hands" (1948), co-starring Joan Fontaine. Lancaster continued his box-office hot streak with "Sorry, Wrong Number" (1948), "All My Sons" (1948), "Rope of Sand" (1949), "Criss Cross" (1949) and "The Flame and the Arrow" (1950), a swashbuckling adventure that gave Lancaster the chance to show off his talent as an acrobat. Lancaster also starred in "Jim Thorpe - All American" (1951), "Ten Tall Men" (1951), "Vengeance Valley" (1951), "The Crimson Pirate" (1952) and "Come Back, Little Sheba" (1952).

For his performance as Sergeant Warden in "From Here to Eternity" (1953), a drama set in pre-World War II Hawaii, Lancaster received his first Academy Award nomination as Best Actor. Though he didn't win, the film received a total of 13 nominations, and won eight Oscars, including Best Picture -- the most awards for one film since "Gone With the Wind" (1939) won nine. In the film's most memorable scene, Lancaster and co-star Deborah Kerr embrace and kiss on the beach, with the surf pounding over them. The scene is still considered by many to be the most passionately erotic scene ever to appear in a major-studio film.

Lancaster received his fourth Academy Award nomination for his performance as an aging small-time gangster in "Atlantic City" (1980), co-starring with Susan Sarandon. He also appeared as a kindly doctor who recalls his younger days as a ballplayer in "Field of Dreams" (1989).

In accordance with his request, Lancaster had no funeral or memorial service when he died.