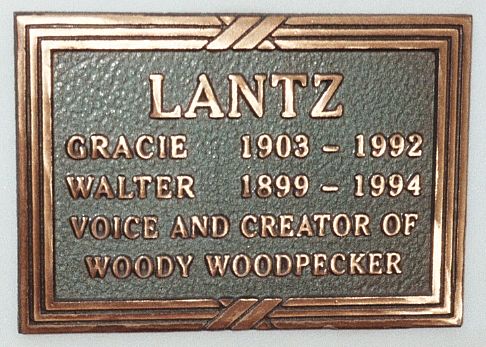 
Although most cartoon fans might know that animator Walter Lantz was the creator of Woody Woodpecker, most might not know that his wife, Gracie Lantz, provided Woody's voice and distinctive laugh for 25 years.

As a teenager, Walter Lantz enrolled in an art school correspondence course, and he joined the animation staff of the International Film Service studios in New York City when he was 16. Lantz then moved to Hollywood, where he worked briefly for director Frank Capra, and as a gag writer for director Mack Sennett.

In 1928, Lantz was hired by Universal studio head Carl Laemmle to oversee the studio's animation department. Lantz arrived just as a young cartoonist named Walt Disney was leaving, taking with him his idea for an animated mouse, which Universal had rejected. But Disney left behind another popular character called Oswald Rabbit, which Lantz inherited. Lantz also worked as writer, animator and director on cartoons starring Dinky Doodle, Pete the Pup, the Katzenjammer Kids and Andy Panda.

Lantz came up with his most famous creation while on his honeymoon in 1940. According to the legend, Lantz was inspired by a woodpecker hammering incessantly on the roof of his honeymoon cottage. Lantz's wife, Gracie Stafford Lantz, suggested that Lantz create a cartoon character based on the annoying bird. Lantz took her advice, and Woody Woodpecker made his film debut in "Knock Knock" (1940), an Andy Panda cartoon, with Mel Blanc providing Woody's voice. After Blanc left the studio to work for Warner Bros., writer Ben "Bugs" Hardaway supplied Woody's voice, but Blanc's distinctive woodpecker laugh was still used in the cartoons.

When "The Woody Woodpecker Song" was released in 1948, featuring Blanc's laugh, he sued Lantz for half a million dollars, claming that his voice had been used without his permission. Although a judge ruled that Blanc had failed to copyright his contribution, Lantz paid Blanc an out-of-court settlement.

In 1950, Lantz needed a new voice for Woody, and was listening to audition tapes. Although his wife said she could provide the voice, Lantz turned her down because Woody was a male woodpecker. So Gracie Lantz secretly prepared her own anonymous tape, and slipped it in with the other audition tapes. Not knowing it was his wife's voice, Lantz picked her tape and Gracie, an actress who appeared in several films in the late 1930s and early 1940s, supplied Woody's voice and distinctive laugh until Lantz stopped making new Woody Woodpecker cartoons in 1975. Gracie Lantz initially declined screen credit for her contribution, thinking children would be disappointed if they found out that Woody's voice was supplied by a woman.

Woody appeared in hundreds of cartoon shorts through the 1940s and 1950s. In 1957, "The Woody Woodpecker Show" debuted on television, hosted by Walter Lantz, who demonstrated tips and techniques of animation between the cartoons. Woody Woodpecker remains popular around the world, primarily because the cartoons rely heavily on physical humor and sight gags with little dialog, and so don't need to be translated for non-English-speaking audiences.

From 1932 to 1956, Lantz was nominated 10 times for an Academy Award for Best Cartoon Short Subject, but never won. In 1979, he was given a special Academy Award, "for bringing joy and laughter to every part of the world through his unique animated motion pictures."

The Lantz's plaque identifies them as "voice and creator of Woody Woodpecker."