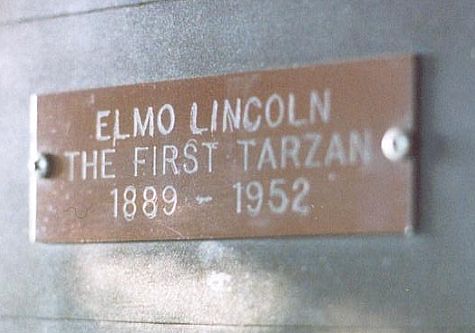 
A small plaque marks the crypt of Elmo Lincoln, and identifies him as "The First Tarzan."

Lincoln was not the first choice to play the lead in "Tarzan of the Apes" (1918), but he got the part when World War I broke out a few days after production started, and the actor originally cast in the role walked off the set to enlist. The film was a box-office success, one of the first films to earn more than $1 million.

Lincoln donned the loincloth for two more films -- "The Romance of Tarzan" (1918) and "The Adventures of Tarzan" (1921). Lincoln symbolically passed the torch to perhaps the best-known Tarzan, Johnny Weissmuller, when he appeared in a small role in "Tarzan's New York Adventure" (1942). Lincoln also had a small role in "Tarzan's Magic Fountain" (1949), with Lex Barker playing the ape-man.