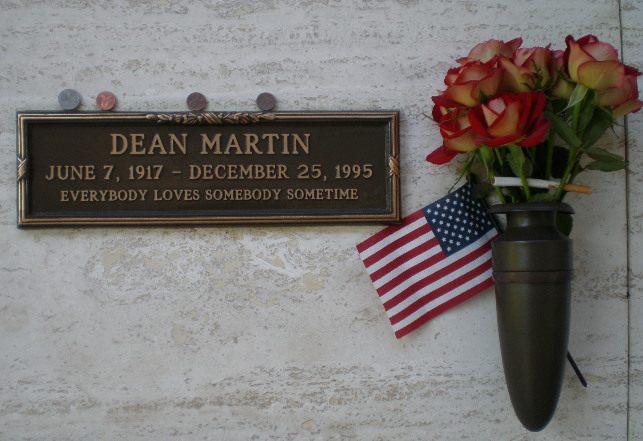 
Dean Martin had several successful careers in show business -- singer, dramatic actor, television star and half of perhaps the most successful film comedy team of all time.

After dropping out of high school in Steubenville, OH, Martin worked in a steel mill, as an unsuccessful amateur boxer, and a dealer in illegal gambling houses. He discovered that singing was less dangerous and more lucrative, and he began performing in nightclubs around the country. While appearing in Atlantic City, NJ, in 1946, Martin met a young comedian named Jerry Lewis, and they joined to form an act that became an immediate sensation, featuring the romantic crooning of the laid-back Martin coupled with the manic comedy of the uninhibited Lewis. Martin and Lewis made their film debut in 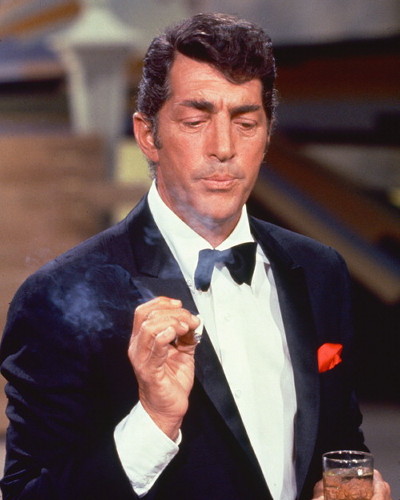 Martin and Lewis became the most popular comedy team and the highest paid entertainers in the country. From 1951 to 1956, they were always among the top-ten box office attractions.

When the pair broke up in 1956, fans were certain that Lewis would continue to be successful on his own, but they weren't so sure about Martin. While Lewis was certainly one of a kind, did the entertainment world really need another handsome, wavy-haired crooner? Martin's first film without Lewis was "Ten Thousand Bedrooms" (1957), a breezy romantic comedy in which he cultivated his image as a sophisticated swinger. Co-starring in his next film with Marlon Brando and Montgomery Clift in "The Young Lions" (1958), Martin proved he was a talented actor who could handle more dramatic roles. Martin co-starred with future Rat Pack partner Frank Sinatra in "Some Came Running" (1958), and with John Wayne in the Western "Rio Bravo" (1959). "Ocean's Eleven" (1960) brought the entire Rat Pack together -- Sinatra, Martin, Sammy Davis Jr., Joey Bishop and Peter Lawford -- for a film featuring a group of old Army pals getting together to rob the casinos in Las Vegas. The Pack also appeared together in "Sergeants 3" (1962). Martin and Sinatra co-starred in "Four for Texas" (1963), "Robin and the Seven Hoods" (1964) and "Marriage on the Rocks" (1965).

On the small screen, Martin starred in "The Dean Martin Show," a weekly music and variety series, beginning in 1965. The show typically featured the sleepy-eyed Martin in his tuxedo, with a cigarette and a glass of booze (though, more likely, it was apple juice), laughing and ab-libbing his way though a series of songs and skits with his celebrity guests. The popular show continued through 1974.

When Martin's son, Dino, an actor and member of the Air National Guard, died in a plane crash in 1987, Martin retired from public life, returning briefly for a national concert tour with Sinatra and Davis.

Martin's crypt marker includes the title of his theme song, "Everybody Loves Somebody Sometime." Unfortunately, several people have placed lit cigarettes on top of Martin's bronze crypt marker, and there are a few burn marks on the marble.

Martin's crypt is usually decorated with flowers, ribbons and an American flag.