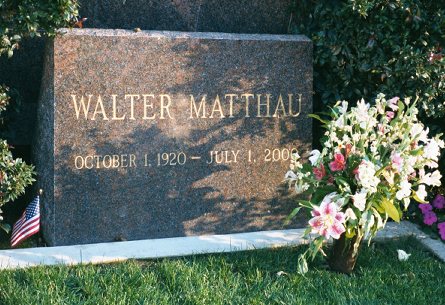 
Walter Matthau was a popular, bloodhound-faced actor who was equally adept at serious dramatic roles, or in comedy roles as the sloppy, scheming or just plain cranky curmudgeons he seemed born to play.

The son of Russian Jewish immigrants in New York City, Matthau started working at the age of 11, selling refreshments in a Yiddish theater, and soon started performing on the stage. After serving in the U.S. Army Air Corps during World War II, Matthau returned to New York and enrolled in acting school, and got his first role on Broadway in 1948 as an understudy in "Anne of a Thousand Days," starring Rex Harrison. As proof that Matthau was "born old," his part in the play was that of an 83-year-old English bishop. Matthau was only 28 at the time.

Matthau also appeared regularly on television, in dramatic anthology series, usually playing villians. He made his film debut in "The Kentuckian" (1955), starring Burt Lancaster. After dramatic supporting roles in "Slaughter on Tenth Avenue" (1957), "A Face in the Crowd" (1957), "King Creole" (1958) -- starring Elvis Presley -- "Lonely Are the Brave" (1962), "Charade" (1963), "Ensign Pulver" (1964) and "Fail-Safe" (1964), Matthau achieved stardom and won a Tony Award on Broadway in "The Odd Couple" as slovenly sportswriter Oscar Madison in a role written especially for him by Neil Simon. When Hollywood finally noticed his comedic talents, Matthau co-starred with Jack Lemmon as a crooked personal-injury lawyer in "The Fortune Cookie" (1966), and won the Academy Award as Best Supporting Actor. Matthau and Lemmon co-starred again in the film version of "The Odd Couple" (1968). The pair co-starred in a dozen films, including "The Front Page" (1974), "Buddy Buddy" (1981), "Grumpy Old Men" (1993), "Grumpier Old Men" (1995), "Out to Sea" (1997) and "The Odd Couple II" (1998). Lemmon directed Matthau in a dramatic role in "Kotch" (1971), the story of an elderly man who refuses to be put out to pasture by his children, which earned Matthau an Academy Award nomination as Best Actor.

Matthau continued to star in comedies including "Hello, Dolly" (1969), "Cactus Flower" (1969) and "Plaza Suite" (1971), as well as dramatic roles in "Charley Varrick" (1973), "The Laughing Policeman" (1973) and "The Taking of Pelham One Two Three" (1974). Matthau co-starred with George Burns in Neil Simon's "The Sunshine Boys" (1975), as a pair of cantankerous old ex-vaudeville stars who reunite for a television special. The roles were originally to have been played by Red Skelton and Jack Benny, but when Skelton dropped out and Benny died just before production was scheduled to begin, Matthau and Burns got the parts. For their performances, Burns won the Academy Award for Best Supporting Actor in his comeback role, and Matthau received an Academy Award nomination as Best Actor.

Matthau's last screen appearance was in "Hanging Up" (2000), in which he portrayed the dying father of Diane Keaton, Meg Ryan and Lisa Kudrow.

Matthau died July 1, 2000, in Santa Monica, CA, after suffering a heart attack at his home. He was buried the next day, in a plain pine coffin, with only about 50 family members and close friends attending his services, according to his request.

One of Matthau's most enduring jokes concerns his real name, which is usually listed as "Walter Matuschanskayasky," even in official biographies. Throughout his life, Matthau seemed to enjoy making up names, and he must've enjoyed giving out this tongue-twister during interviews. When he filled in his Social Security forms in 1937, he listed his middle name as "Foghorn," and he often said that his wife's real name was Carol Wellington-Smythe Marcus, which he later admitted that he made up because it sounded more "aristocratic."

After Matthau's death, his son, actor and director Charles Matthau, admitted that his father made up the longer version of his "real" name for his appearance in "Earthquake" (1974). Originally, Matthau agreed to appear in the film when he thought his role would be much larger. When he ended up playing a cameo appearance as a drunk in the film, he used the name "Walter Matuschanskayasky" in the credits, and later told interviewers that was his real name. In fact, his real name was Walter Matthow.