Louis B. Mayer was the stereotypical Hollywood studio mogul -- a short, feisty, cigar-chomping czar who ruled his kingdom with an iron fist. His studios were true film factories, with the stars treated like assembly-line workers, and "L.B." in charge of everything for 27 years -- equally respected and feared, part father figure, part tyrant.

Mayer was born in a small town in the Minsk district of Russia, although the exact date is not certain. Mayer knew only that he was born in the summer, so he picked July 4 for his birthday. The family came to North America, living for a while in New Brunswick, Canada. Mayer's father worked as a peddler and a scrap metal dealer, and Mayer made several trips to Boston, MA, to arrange for the sale of scrap metal. In 1904, the 19-year-old Mayer moved to Boston, leaving his family behind in New Brunswick.

With the scrap metal business failing, Mayer purchased a small, dilapidated, 600-seat theater called the Gem in the Boston suburb of Haverhill in 1907. Mayer renamed the theater the Orpheum, and promised the public that he would present only "high-class films." When the Orpheum became a success, Mayer expanded into film distribution by opening the Louis B. Mayer 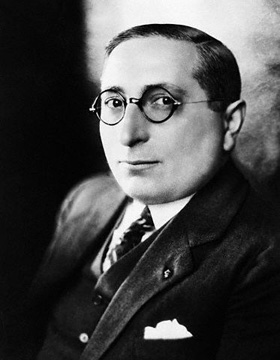 Film Company. In 1913, Mayer entered into an arrangement with Jesse Lasky, who was producing films in California, and other film producers. Two years later, Mayer and several partners formed the Metro Pictures Corporation, and one of the first films they acquired for distribution was D.W. Griffith's classic "Birth of a Nation" (1915).

Following the enormous financial success of that film, Mayer formed a series of distribution companies -- Master Photoplays, Serial Producing Company and American Feature Film Company. In 1918, Mayer lured actress Anita Stewart away from Vitagraph, formed Louis B. Mayer Pictures, and moved to Los Angeles to start making his own films. His first production, "Virtuous Wives" (1918), starring Stewart and Hedda Hopper, was a success.

Beginning with his promise of presenting only "high-class films" in Haverhill, Mayer continued his policy of making films which stuck to the themes of honor, fidelity, decency and virtue. His early films followed a similar formula -- poor but decent girl faces severe temptations, and triumphs over all in the end. "I will only make pictures that I won't be ashamed to have my children see," Mayer said. And the film-going public seemed to enjoy these themes as much as Mayer did.

While building his studio, Mayer hired 24-year-old Irving Thalberg away from Universal Studios to be his vice president and production assistant in 1923. Later that year, Marcus Loew, president of the powerful Metro Pictures Corp. and the Loew theater chain; Frank Joseph Godsol, president of the Goldwyn Company; and Mayer met to discuss a merger of the three companies. Loew had a large and successful chain of theaters, but he was unhappy with the way his film-production studio was being operated. Godsol had a large and well-stocked studio in Culver City, but lacked the distribution and exhibition facilities. And Mayer and Thalberg could provide the successful studio management. The deal was signed in 1924, and Metro-Goldwyn-Mayer was born.

Mayer moved to the Goldwyn lot in Culver City, a 40-acre facility with a three-story office building and six large stages. With the facilities and talent of the three combined studios at their disposal, Mayer and Thalberg built an entertainment empire. One of their first big productions was the epic "Ben-Hur" (1925), starring Ramon Novarro and Francis X. Bushman, which was filmed partially on location in Italy.

For a time, the MGM film factory released an average of one feature film per week. In 1936, Mayer was the first business executive in the country to make $1 million per year, and he remained the highest-paid executive through 1944. Thalberg felt entitled to an equal share, but Mayer had begun to resent the prevailing opinion that Thalberg was the real genius behind MGM's success. An angry Thalberg threatened to leave MGM. Their conflict was finally ended when the sickly Thalberg died of pneumonia in 1936.

On the MGM payroll, according to the well-known studio slogan, were "more stars than there are in heaven," including, at various times, Clark Gable, Joan Crawford, Cary Grant, Spencer Tracy, Elizabeth Taylor, Buster Keaton, Katharine Hepburn, Lana Turner, Judy Garland, Mickey Rooney, the Marx Brothers, Laurel and Hardy, William Powell, John Barrymore, Lionel Barrymore, Myrna Loy, Ava Gardner and one of Mayer's personal discoveries, Greta Garbo. Mayer was often personally involved in the private lives of his employees, usually to make sure their public reputation matched the studio's image for wholesomeness and decency. When MGM executive and writer Paul Bern, recently married to MGM starlet Jean Harlow, committed suicide, Mayer arrived on the scene before the police, and took Bern's suicide note. He feared the incident might reflect poorly on the studio, but he was eventually convinced to turn the note over to the police. When Mickey Rooney, star of the "Andy Hardy" series and a well-known womanizer and partygoer, started to get a little too much press, Mayer took him aside and gave him the Mayer version of a Judge Hardy lecture: "You're Andy Hardy! You're the United States! You're Stars and Stripes! You're a symbol! Behave yourself!" There are even reports that when one of MGM's biggest stars was driving drunk on Hollywood Boulevard and killed a pedestrian, Mayer arranged for a low-level studio employee to take the blame in exchange for a life-time job guarantee.

Mayer ruled over MGM as a big family -- with Mayer as the paternalistic authority, rewarding loyalty and obedience, punishing insubordination, and regarding opposition as personal betrayal.

By the late 1940s, the golden years for studio moguls were coming to an end. The government was forcing the film industry to divest its lucrative theater chains, and top stars and directors were demanding a share of the profits that Mayer had always denied them. Dore Schary, head of production at RKO Studios and former Academy Award-winning writer at MGM (for "Boys Town") was hired to replace Thalberg. Schary and Mayer battled from the very start. When the slumping financial situation at MGM began to improve almost as soon as Schary returned to the studio lot, rumors began circulating that Mayer would either resign or be forced out by Nick Schenck, president of Loew's, Inc., which controlled MGM. After yet another battle with Schary, Mayer called Schenck with an ultimatum -- "It's either me or Schary." To Mayer's shock, Schenck choose Schary, and Mayer submitted his resignation in 1951. After Schenck retired in 1955, Mayer made an attempt to convince the major Loew's stockholders to allow him back to control the studio again, but he was rejected just weeks before he died.

In 1950, Mayer was given a special Academy Award, "for distinguished service to the motion picture industry."

At Mayer's funeral, Jeanette MacDonald sang, "Ah, Sweet Mystery of Life," and Samuel Goldwyn, the founder and former head of the Goldwyn Company, reportedly quipped, "The reason so many people showed up at his funeral was because they wanted to make sure he was dead."