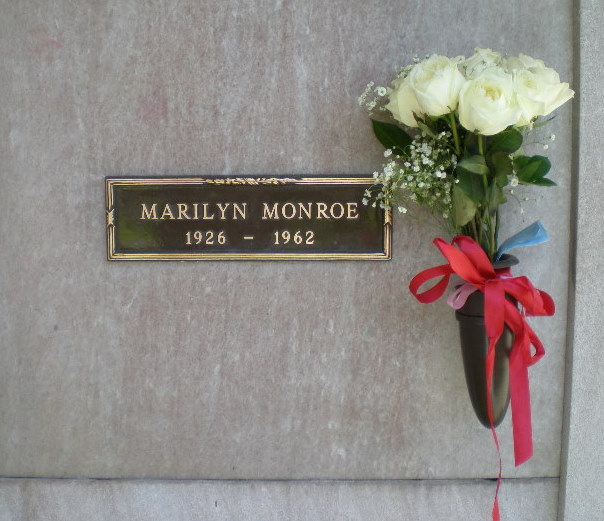 
In the northeast corner of this tiny cemetery you'll find the crypt of Marilyn Monroe, perhaps the most famous blonde in history who became the ultimate symbol of Hollywood glamour, sex appeal and, ultimately, tragedy.

(It's almost impossible not to find Monroe's crypt. If there aren't several people standing in front of it, as there usually are, just look for the fresh flowers, cards, letters and other mementos left by her fans.)

The details of Monroe's short, extremely public life are well known. She was born to a mentally unstable mother and absentee father, raised in foster homes and seemed to spend her life searching for affection and attention. She married for the first time a few weeks after her 16th birthday, and was divorced three years later. She began to take acting classes and worked as a model -- in 1947 she was named Miss California Artichoke Queen -- and she made her film debut in a small role in "The Shocking Miss Pilgrim" (1947), starring Betty Grable. She also had a small role in "Love Happy" (1950), starring the Marx Brothers. Larger roles in "The Asphalt Jungle" (1950) and "All About Eve" (1950) resulted in a long-term contract at 20th Century studios, and starring roles in "Niagra" (1953), "How to Marry a Millionaire" (1953) and "Gentlemen Prefer Blondes" (1953), which launched her as sex symbol.

In December 1953, one of Monroe's early modeling assignments, a nude calendar shot in which she was stretched out on a red velvet sheet, appeared in the 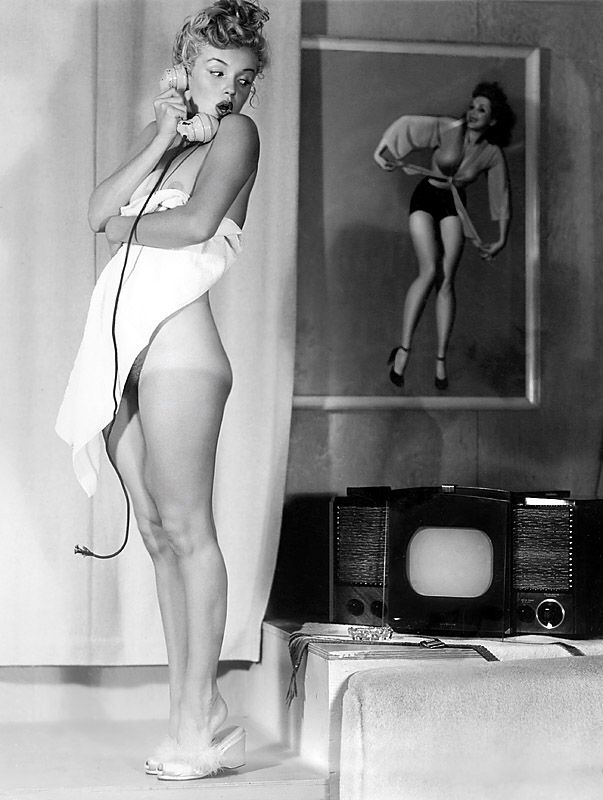 first issue of Playboy magazine, which also featured a photo of Monroe on the cover. Playboy publisher Hugh Hefner paid $500 for the rights to use the photo, and Monroe was identified as the magazine's first "Sweetheart." Later, the term was changed to "Playmate of the Month." Rather than damage her career, however, the publicity from the photo seemed to make Monroe an even bigger and more popular star. Monroe explained that she took the modeling assignment in 1949 because she needed the $50 because her car had recently been repossessed, and the public seemed to sympathize.

In January 1954, Monroe married Joe DiMaggio, the recently retired baseball superstar of the New York Yankees. But DiMaggio, a traditional family man, wanted Monroe to give up her acting career and become a traditional housewife, which she was reluctant to do. When DiMaggio watched his wife filming a scene for "The Seven-Year Itch" (1955), with hundreds of men on the street watching her stand over a subway grate to see her skirt blown up over her waist, that was all he could stand. DiMaggio and Monroe were divorced in October 1954, only nine months after their wedding.

As an actress, Monroe's specialty seemed to be innocent sexuality, with a high level of vulnerability and natural humor. In most of her films, she plays characters who don't realize how beautiful they are. Off screen, Monroe developed a reputation as a difficult and undependable actress who was fighting a losing battle against alcohol and drug abuse. She would often show up late on the set, if she showed up at all. She constantly frustrated more serious actors, including Sir Laurence Olivier, her co-star in "The Prince and the Showgirl," and Clark Gable, her co-star in "The Misfits," who was quoted after the filming as saying, "Working with Marilyn Monroe in 'The Misfits' nearly gave me a heart attack. I have never been happier when a film ended." In fact, Gable did suffer a fatal heart attack shortly after the film was completed.

In the early 1960s, Monroe was romantically linked to President John Kennedy and, later, to his brother, Attorney General Robert Kennedy, among others. In May 1962, she made one of her most sensational public appearances when she sang a breathy, seductive version of "Happy Birthday" to President Kennedy at a celebration at Madison Square Garden in New York City, wearing a nearly transparent, $12,000 dress that she was literally sewn into. (In 1999, the dress was sold at auction for nearly $1.3 million.)

DiMaggio and Monroe remained friends after their divorce, and spoke to each other often. In fact, after Monroe's divorce from playwright Arthur Miller in 1961, DiMaggio and Monroe had begun seeing each other again, and several biographers have reported that the couple was planning to re-marry.

On Aug. 6, 1962, Monroe was found dead in the home she had recently purchased for $75,000 on 5th Helena Drive in the Brentwood section of Los Angeles - the first home she ever owned. She was found laying nude on her bed, clutching a telephone receiver in her hand. The initial report was that she had died of an overdose of sleeping pills. She was 36 years old.

Monroe had called her psychiatrist the evening before and told him that she was having trouble getting to sleep, and the psychiatrist suggested that she go for a drive. An estimated 15 medicine bottles, some with prescription labels, were found on the nightstand near Monroe's bed, including an empty bottle which had contained Nembutal capsules -- a powerful barbituate. (Due to the high risks of addiction and the dangers of overdose, Nembutal is now rarely prescribed for insomnia.) The prescription for 50 Nembutal capsules had been written two or three days before Monroe's death, with a suggested dosage of one capsule per night. 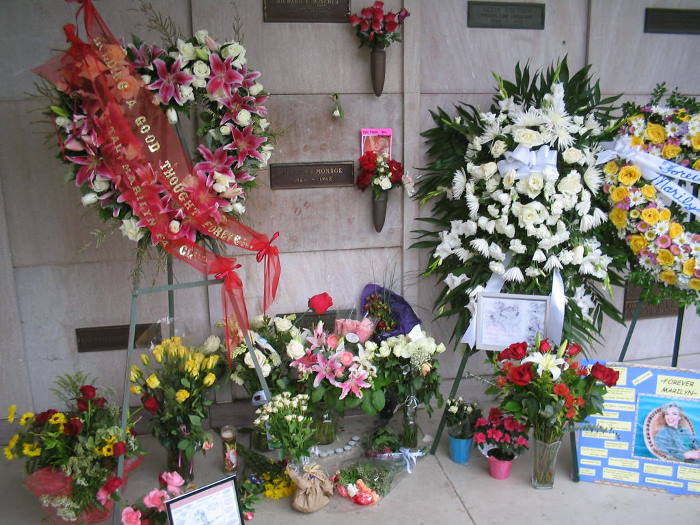 been fired by Monroe. Proponents of each of these theories seem to be able to prove, beyond any doubt, that they are correct, but the only thing they seem to be able to prove is that, decades after her death, the public is still interested in Monroe, still willing to buy books on the subject, and still willing to believe that the ultimate sex goddess would not kill herself. Even so, the official cause of Monroe's death is listed as an accidental suicide.

Monroe's funeral services were held three days after her death at Westwood Memorial Park - the second funeral held in the new chapel. DiMaggio took control of the funeral arrangements, and only 31 close friends and relatives were invited to the services More than 50 Los Angeles police officers were at the cemetery to keep the uninvited out of the cemetery, assisted by 40 security guards hired by 20th Century-Fox studios. Bleachers were set up outside the north wall of the cemetery to accommodate the press, and hundreds of fans stood quietly outside the cemetery gates. DiMaggio had invited Carl Sandburg to speak at the services, but the poet was ill and could not attend. Monroe's former acting coach, Lee Strasberg, delivered the eulogy. None of Marilyn's co-stars or friends from the entertainment industry were invited, even though many flew to Los Angles to attend the services. At the time, DiMaggio said, "We could not in conscience ask one personality to attend without perhaps offending many, many others." But privately, DiMaggio blamed the film and entertainment community for Monroe's death.

Monroe was buried in an $800 coffin, wearing a simple green dress, with a green scarf tied around her neck. In her hands was a tiny bouquet of baby pink roses, placed there by DiMaggio. After the services, just before the coffin was closed, DiMaggio leaned over, kissed Monroe on the lips, and whispered, "I love you, I love you." That evening, after the funeral services were completed and Monroe's body was placed in the crypt, DiMaggio returned to the cemetery alone for a final, private farewell. For the next 20 years, until 1983, DiMaggio arranged to have six red roses sent to Monroe's crypt, three times a week. And when DiMaggio died in March 1999, his last words were reported to be, "I'll finally get to see Marilyn."

Even though Monroe appeared in only 30 films during her career, including the early bit parts, her star still shines brightly. At the end of the 20th century, various magazines came out with their lists of the top film stars, the sexiest women and the most popular people of the century, and Monroe's name was always near the top of those lists. She may also be the most imitated actress in history, with everyone from Jayne Mansfield to Madonna trying to copy her look. And it's impossible to walk down Hollywood Boulevard and not see Monroe's image on T-shirts, posters and other products in nearly every store window.

But if Monroe was the embodiment of Hollywood glamour and style, why was she buried in what was then a particularly unfashionable and relatively unknown little cemetery on the edge of town? Monroe often visited the cemetery, where her former guardian, Grace McKee Goddard (1895 - 1953), and her surrogate mother, Ana Atchinson Lower (1880 - 1948), were buried. Monroe lived with Lower from the age of 12 until her first marriage in 1942, just after she turned 16. After Lower's death, Monroe used to spend many hours at the cemetery, sitting on a bench near her grave. (Both Goddard and Lower are buried within a few feet of each other, in the large urn garden in the southwest corner of the central lawn area - the opposite corner from Monroe's crypt. Their grave markers are directly west of the large tree near the curb in the urn garden.) In fact, on one occasion, Monroe saw cemetery workers digging a grave, and she asked them if she could climb down into the open hole. "I went down and lay on the ground and looked up at the sky from there," she later recalled. "The ground is cold under your back, but it's quite a view."

You may notice that there's an empty space to the left of Monroe's crypt. If you're making any pre-need plans, and thinking about spending eternity resting next to the ultimate sex symbol, you should know that Hugh Hefner, founder and publisher of Playboy magazine, has already purchased the spot, reportedly paying $85,000 for the pleasure of spending eternity next to his first "Sweetheart." The last remaining crypt on the same wall as Monroe was recently priced at $125,000.

Even decades after her death, Monroe is still Westwood's most popular resident, attracting an estimated 350 visitors every day. In fact, cemetery employees complain about the difficulty they have trying to remove the lipstick marks left by adoring fans on her marble crypt.

A few feet in front of Monroe's crypt is a white stone bench, which was paid for and installed in 1992, on the 30th anniversary of her death, by two Monroe fan clubs - All About Marilyn and Marilyn Remembered. Every year on the anniversary of her death, the Marilyn Remembered fan club hosts a memorial service as Westwood, usually attracting hundreds of friends, fans, impersonators and dozens of floral arrangements in front of her crypt.

Monroe has been portrayed more than two dozen times in various theatrical and made-for-television films, including by Catherine Hicks in "Marilyn: The Untold Story" (1980), Heather Thomas in "Hoover vs. The Kennedys" (1987), Susan Griffiths in "Marilyn and Me" (1991), Stephanie Anderson in "Calendar Girl" (1993), Melody Anderson in "Marilyn and Bobby: Her Final Affair" (1993), Ashely Judd and Mira Sorvino in "Norma Jean and Marilyn" (1996), and Barbara Niven in "The Rat Pack" (1998).

While Monroe was on a flight over the Arizona desert a few years before her death, the plane's engine faltered briefly. Monroe and her seatmate, a reporter for a London newspaper, discussed what would happen if the plane crashed, and she was asked what she wanted to appear on her epitaph. "I'll settle for this," she joked. "Here lies Marilyn Monroe -- 38-23-36."