The early life and career of coin-flipping, tough-guy actor George Raft seems to mirror the stories told in the gangster films that became his specialty.

He was born in the tough Hell's Kitchen neighborhood of New York City, left home at 13, found work as a prizefighter, and counted mobsters and racketeers among his closest friends. But, rather than follow his pals into a life of crime, Raft became a dancer, performing in nightclubs and eventually on Broadway.

Raft came to Hollywood in 1928, and was initially touted as the next Valentino. He made his screen debut in a small role as a dancer in "Gold Diggers of Broadway" (1929), and appeared in small roles as a dancer or gangster in several films before his first big role as Guino Rinaldo, 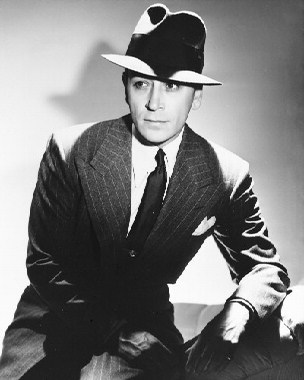 Raft's success and believability in these films may have been partially due to his continuing association with real-life mobsters, including Bugsy Siegel, and his ownership of casinos in London and Havana.

Raft is also known by the roles he turned down. He passed on the role of "Mad Dog" Earle in "High Sierra" (1941) because the character dies on screen, and he also turned down the role of Sam Spade in "The Maltese Falcon" (1941) because he thought it was going to be a low-quality film. Both roles went to Humphrey Bogart, and both films are now considered classics.