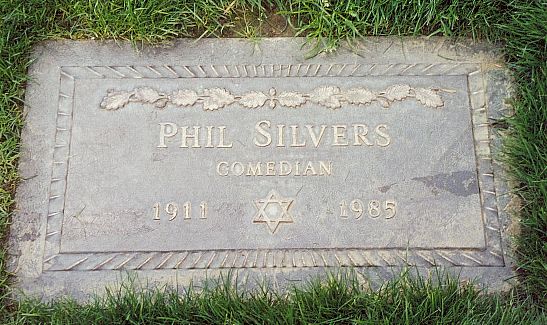 With his toothy grin, bald head and black, horned-rimmed glasses, Silvers' career-defining break came when he landed the role of Sgt. Ernie Bilko, the loveable, back-slapping con man who runs the motor pool at a small Army base in Kansas, in the television series originally called "You'll Never Get Rich," which debuted in 1955. After the first few episodes, the series was re-named, "The Phil Silvers Show." In 1956, the series won Emmy Awards for Best Comedy Series, Best Writing and Best Directing, and Silvers won Emmy Awards for Best Actor and Best Comedian.

After the series ended in 1959, Silvers played similar characters in films including "It's a Mad Mad Mad Mad World" (1963), "A Funny Thing Happened on the Way to the Forum" (1966) and "Buona Sera, Mrs. Campbell" (1968), as well as guest appearances on the television series, "The Beverly Hillbillies" and "Gilligan's Island."

In his will -- a four-page, handwritten document signed less than two years before he died -- Silvers requested that his funeral be held at Forest Lawn, and that comedian Milton Berle deliver the eulogy. "I want a simple coffin and a small headstone inscribed 'Phil Silvers, Comedian,'" he wrote. "I request my funeral arrangements, coffin and headstone not to exceed the sum of $10,000. I go to my God knowing at least as a comedian I was only one of a kind."