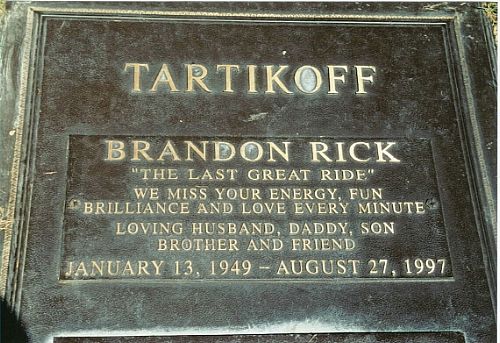 
Though not a performer, Brandon Tartikoff left a strong and deep impression on the world of entertainment during his short life, when he was the golden boy of NBC television in the 1980s.

Tartikoff became the youngest entertainment president of a major network when he took over NBC in 1980 at the age of 30. He brought the network from worst to first in the ratings in the 1980s with shows including "Hill Street Blues," "Cheers," "L.A. Law," "The Cosby Show," "St. Elsewhere," "The A-Team," "Miami Vice" and "Seinfeld." Under Tartikoff's leadership, NBC was the top-rated network for five consecutive seasons.

After graduating from Yale University, Tartikoff worked in a series of jobs in television and advertising on the East Coast before coming to Los Angeles to look for a job in network television. His big break came when Fred Silverman, head of programming at ABC, hired him as the network's director of dramatic development in 1976. A year later, he went to NBC to supervise comedy programming. Three years later, he was in charge of all of the network's entertainment offerings, and remained in that position for 11 years. Tartikoff even played himself in episodes of the television series "Night Court" and "Saved by the Bell."

After leaving NBC, Tartikoff became head of Paramount Pictures in 1991. A little more than a year after taking the job, Tartikoff suddenly resigned to spend more time with his family after his daughter was seriously injured in a car accident and was undergoing rehabilitation. After she recovered, Tartikoff became head of New World Entertainment from 1994 to 1996, and also ran his own production company, called H. Beale, named after a character in the movie "Network" (1976). Shortly before his death, Tartikoff was hired by American Online to oversee the development of original interactive entertainment for the online service.

Tartikoff was first diagnosed with Hodgkin's disease, a cancer of the lymph nodes, when he was 23, but he kept his illness quiet while he was working at NBC. He was undergoing chemotherapy treatments when he died at the age of 48.

Tartikoff's widow, Lilly -- a former dancer with the New York City Ballet -- has became one of the country's leading fund-raisers for cancer research. She has raised literally tens of millions of dollars to fight breast and ovarian cancer, she created the National Women's Cancer Research Alliance, and is the co-founder of the National Colorectal Cancer Research Alliance. Lilly Tartikoff also helped create the Revlon/UCLA Women's Cancer Research Program, which raises money with its annual "Fire and Ice Ball" and the Revlon Run/Walk in Los Angeles and New York City.

Tartikoff's grave marker includes the inscription: "The Last Great Ride -- We miss your energy, fun, brilliance and love every minute."