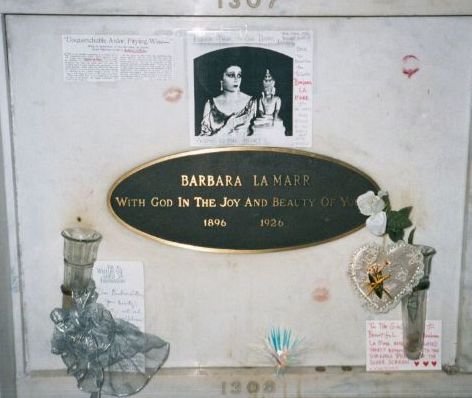 
Barbara La Marr, known as "The Girl Who Was Too Beautiful," was one of the first big stars of Hollywood, and one of its first victims.

La Marr's parents moved to a small town in California when she was a teenager, but she quickly left home to explore the opportunities available to an attractive girl in the big city of Los Angeles. She was arrested for dancing in a burlesque show while she was 14, and a judge said she was "too beautiful to be alone in a big city, alone and unprotected," a comment which lead to her eventual screen nickname.

She began her film career as a writer in 1920 for the Fox Film Corporation, but studio executives recognized the appeal of this beautiful, energetic woman, and put her in front of the cameras. Her screen debut was in "Harriet and the Piper" (1920). She had small parts in "The Nut" (1921) and "The Three Musketeers" (1921), both starring Douglas Fairbanks, and quickly graduated to starring roles in "Arabian Love," "Domestic Relations," "Trifling Woman" and "The Prisoner of Zenda," all released in 1922.

La Marr was also keeping busy outside the studio. She was already on her fifth marriage, was a familiar face on the Hollywood party scene, and had developed a strong relationship with alcohol and drugs. La Marr reportedly slept only two hours per night -- "I have better things to do," she said.

La Marr was equally adept at comedy, drama or romance. The raven-haired beauty appeared in nine films in 1923, including "St. Elmo," with John Gilbert, and "The Eternal City," with Lionel Barrymore. But her wild off-screen life was beginning to wear her down, and she appeared in only four films in 1924, and two in 1925. Her last film was "The Girl From Montmartre" (1926), co-starring Lewis Stone.

Her body weakened by drugs and her wild life, La Marr was diagnosed with tuberculosis, and died in early 1926 -- a few months before her 30th birthday. An estimated 40,000 mourners attended her funeral.

Though La Marr is perhaps not as well-remembered as some of her silent screen contemporaries, like Mary Pickford, Clara Bow, Mabel Normand, Themla Todd or Gloria Swanson, she is certainly not forgotten. Her crypt is often decorated with flowers, photographs, notes from fans, even lip prints.

And, years after her death, MGM studio chief Louis Mayer, one of La Marr's greatest fans, decided to pick a new name for a young starlett named Hedwig Kiesler. He decided to name her in honor of La Marr -- and gave her the name Hedy Lamarr.

La Marr crypt contains the inscription, "With God in the joy and beauty of youth."