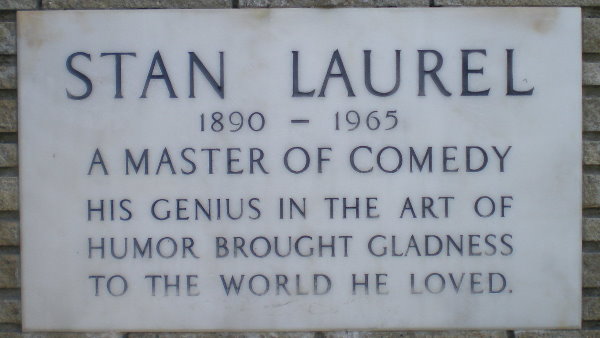 
Stan Laurel, half of the most successful comedy team in film history, was the son of an actor and theater manager in England, and he started working on music hall stages at a teenager. He toured the United States with Fred Karno's vaudeville troupe in 1910, along with fellow performer Charlie Chaplin. When the Karno company returned to the United States in 1917, Laurel remained behind and made his film debut in "Nuts in May" (1917). Laurel appeared in dozens of silent comedy shorts over the next few years, including starring in a parody of Rudolph Valentino's popular bullfighter film, "Blood and Sand" (1922), titled "Mud and Sand" (1922), in which Laurel's character is named Rhubarb Vaselino. Later that year, Laurel starred as a man accused of dognapping in "Lucky Dog" (1922). Playing a bit part as a masked bandit in the film was another young comedian named Oliver Hardy. It was their first screen appearance together.

The pair didn't work together again until "Forty-Five Minutes from Hollywood" (1926). Though Hardy and Laurel appeared in several more films together, it wasn't until Hal Roach formally paired them as a comedy team that the "Laurel and Hardy" characters emerged - the Mutt and Jeff pair, in suits and bowler hats, full of dignity and self-importance, set to take on the

world. The only problem is, they always lose. Their most successful and popular films typically began with a minor mishap, usually caused by Laurel, that escalates into a full-blown crisis, often with cataclysmic results. But, throughout the ordeal, they are always innocent, simple and unswervingly dedicated to each other.

Though the Laurel and Hardy characters evolved slowly, "Do Detectives Think?" (1927) is generally accepted at the first official "Laurel and Hardy" film. The pair were masters at every form of comedy, from broad physical humor and slapstick, to verbal sparring, to more subtle humor. Audiences would laugh just as hard at the pair being chased down a flight of stairs by a runaway piano as they would at Hardy's delicate "slow burn" after yet another of Laurel's well-intentioned but misguided efforts. Few other comedians were as successful in so many different ways. Laurel's character, the feather-brained member of the team, would typically scratch his head, blink his eyes and sob at the first sign of trouble, while the exasperated Hardy would exclaim, "Well, here's another fine mess you've gotten me into!"

While Laurel seemed to be the less intelligent member of the screen duo, off screen he was the more creative, often writing many of the team's comedy routines.

Laurel and Hardy entered into sound films without missing a beat or losing any of their comedy genius. In fact, their verbal exchanges became the more memorable parts of their films. The duo also progressed from two-reel comedies to full-length features, even though they won an Academy Award in 1932 for "The Music Box," the first Oscar presented for a live-action short comedy. "The Music Box" was the simple story of Laurel and Hardy trying to haul a piano up a lengthy flight of stairs. The stairs are still there, virtually unchanged, at 923 N. Vendome St., near Del Monte Drive in the Silver Lake neighborhood of Los Angeles. The stairs are a popular spot for Laurel and Hardy fans, and a commemorative plaque identifies the location.

"If any of you cry at my funeral," Laurel once said, "I'll never speak to you again." The plaque above Laurel's grave identifies him as, "A master of comedy. His genius in the art of humor brought gladness to the world he loved." Laurel is buried with his seventh wife, Ida Kitaeva Laurel, whom he married in 1946. She died in 1980.